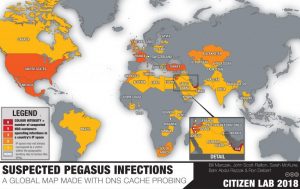 Following the recent alarm about the worldwide diffusion of Pegasus, the spyware used by repressive governments to spy citizens, activists, politicians and foreign authorities, Amnesty international conducted forensic tests on mobile phones to identify traces of the spyware. And released an easy tool (Mobile Verification tool MVT) to monitor and reveal traces of the software both on android and iOS mobile devices.

More information and the report of the 2014-2021 forensic tests here.